An ultrasound is a non-invasive examination that helps physicians diagnose and treat medical conditions. Also known as sonography, an ultrasound uses high frequency sound waves to produce real-time images of the body’s internal organs, plus blood flow through vessels. It’s used to identify changes in appearance of organs, tissues and vessels, and detect abnormal masses such as tumors.

How does an ultrasound work?

A small hand-held device called a transducer is pressed against the skin, which sends high frequency sound waves into the body. As the sound waves bounce off internal organs, fluids and tissues, the sensitive microphone in the transducer records the sound’s pitch and direction. These signature waves are instantly measured and displayed by a computer, which in turn creates a real-time picture on a monitor. The principles are similar to sonar used by boats and submarines.

A Doppler ultrasound is a specific type of ultrasound, and measures the direction and speed of blood cells as they move through vessels. The movement of blood cells causes a change in pitch of the reflected sound waves (called the Doppler effect). A computer collects and processes the sounds and creates graphs or color pictures that represent the flow of blood through the blood vessels. 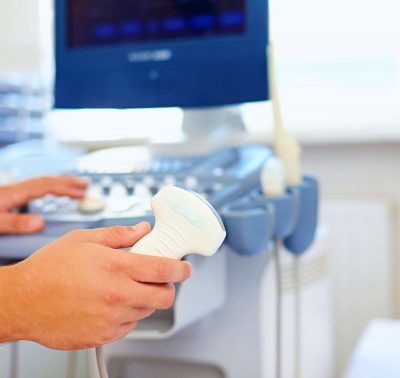 Preparation for an ultrasound

You should wear comfortable, loose-fitting clothing for your ultrasound exam. You may be asked to remove some items of clothing and jewellery and wear a gown during the procedure. Many ultrasounds require you to go without food 8-12 hours prior to the examination, however your physician will advise you on exactly what’s required.

For appointment bookings & cancellations, please call us
Contact Us Now!